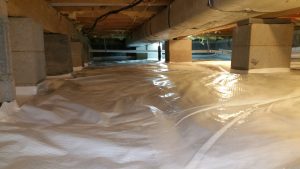 Are you trying to find permanent basement waterproofing in Illinois for your home or building? Specializing in waterproofing and foundation repair, Everdry Illinois offers the best solutions for your unique situation at a competitive quote. We are so confident in our work in the Chicago area that we will even give you a Lifetime Guarantee on most of our services! Contact Everdry Illinois when you think your foundation might have issues and we will send a professional to analyze your specific situation and create a tailored strategy. Everdry Illinois is an expert basement waterproofing, foundation repair and crawl space waterproofing company that can help you with basement leaks and flooding with our waterproofing services. We pay closer attention to the small details you can see up close. We’ve seen tiled floors installed that look pretty good at first glance, but upon closer inspection, many tiles are clearly cut uneven and are out of proportion. We have a ‘Job Walk’ at the beginning of every project, and a ‘Final Walk Through’ at the end of every project. It is important to us that quality control be a part of every remodeling project from start to finish. Your Project Manager will also be regularly inspecting your project as it moves towards completion to make sure nothing is overlooked. Oversight is all-important! With Everdry Waterproofing Illinois , every aspect of your project looks good at first glance AND up close.

DuPage and Kane Counties, 35 miles W of the Loop. The city of Aurora, the economic anchor of the Fox River Valley area, has a population of over 110,000. It began in 1834 (incorporated in 1845), when Joseph and Samuel McCarty came from New York looking for a river site to build a mill. A strategic bend in the Fox River at this location satisfied the McCarty brothers. The river served as a power source for mills and early factories even as periodic floods destroyed businesses, bridges, and dams. In 1854 a second town incorporated west of the river, and three years later, the separate municipalities united. To ease political tensions between the two, civic offices were located on an island in the river; ward boundaries ended at the river, and the mayor was elected from alternate sides until 1913. While initially the east side was much larger both geographically and in population than the west side, the river now divides the town through its general geographic center. Following the establishment of textile mills and gristmills, Aurora became a manufacturing center, primarily of heavy-machine building equipment. In 1856 the Chicago, Burlington & Quincy Railroad located its railcar construction and repair shops in Aurora to become the town’s largest employer until the 1960s. These businesses were located primarily on the east side and provided employment for four generations of European immigrants. Aurora’s professional and managerial workers came from Yankee stock and settled across the river, making the west side more affluent. The combination of these three factors—a highly industrialized town, a sizable river that divided it, and the Burlington’s shops—account for much of the dynamics of Aurora’s political, economic, and social history.

Aurora’s character formed early. Philosophically, the town was inclusive and tolerant, welcoming a variety of European immigrants and openly supporting abolitionist activity prior to the Civil War. Mexican migrants began arriving after 1910. Socially, the town was progressive in its attitude toward education, religion, welfare, and women, for example, establishing the first free public school district in Illinois in 1851 and a high school for girls in 1855, supporting 20 congregations (including two African American churches) representing nine denominations in 1887, and establishing a YWCA in 1893 which is still in operation today. As late as the post–World War II boom, manufacturing companies continued to locate in Aurora to take advantage of the abundant workforce, good transportation, and a favorable economy. Few labor problems affected Aurora. With the closing of many factories in the 1980s, the town’s unemployment rate reached 16 percent. In response, Aurora initiated downtown redevelopment and border annexations, welcoming riverboat casinos, mixed-use business parks, and residential communities to create 20,000 jobs. In 2000 Aurora’s population was 32 percent Hispanic and 11 percent black. The city remains a self-sufficient community, independent of Chicago for its identity, but connected to it through the economic patterns that tie suburbs, edge cities, and central cities together. Aurora is frequently referred to as a Chicago suburb, most often by the nonlocal media or for promotional purposes.

Downtown Aurora is home to the Paramount Theatre, a large live performance theater on the National Register of Historic Places, and the Hollywood Casino. There is also the Leland Tower, a former hotel which was the tallest building in Illinois outside of Chicago and is on the National Register of Historic Places. The largest collection of commercial buildings by Prairie School architect George Grant Elmslie is here. The main building of Aurora Public Library and a branch campus of Waubonsee Community College are also located downtown. Downtown Alive, a festival that includes live music and a variety of food booths, is held on three weekends (Friday and Saturday night) in the summer; Blues on the Fox (featuring national blues artists) is held on the Friday and Saturday of Father’s Day weekend. Roughly 8,000–13,000 people attend. The quarterly AuroraArtWalk is hosted by the Cultural Creatives—a grassroots team of local artist, property owners, patrons, and the City of Aurora. The Riverfront Playhouse is a not-for-profit theater that has held a storefront location in downtown Aurora since 1978. A fixture of Downtown Aurora, the Waubonsee Community College Campus, which was formerly located on Stolp Island near the Paramount Theatre, recently closed. A new and greatly expanded campus was built on the western banks of the river, between the river and IL Route 31. The construction of the campus was part of a larger plan to redevelop the Downtown area, putting in parks and new walking paths, and making the area more inviting. The plan also included a pedestrian bridge to connect the banks of the river. Also in the works is a plan to modify or reconstruct the bridges to Stolp Island, which have not been maintained for nearly 60 years.