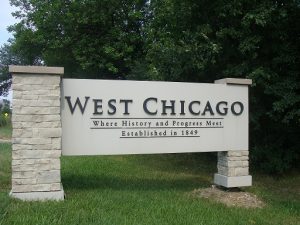 As part of the effort to attract industry, the community changed its name in 1896 to the Village of West Chicago.  Area businessmen, particularly Charles Bolles, reasoned that the new name sounded more cosmopolitan, and would help locate the town for prospective factory owners.  It was also at this time that the Village built a water works, thereby decreasing the threat of fire. Several manufacturing plants such as the Turner Brick Company, Stimmel & Hook Pump Works and Roach & Brandt Millwork opened in West Chicago despite a depression in the 1890s.  As industry located in town and new jobs became available, the population increased.  By 1900 it reached 1,877, while in 1910 2,378 people lived in town. In 1906, the village reincorporated itself as the City of West Chicago, with banker Grant A. Dayton serving as first mayor.

By 1909 yet another railroad built tracks to West Chicago,  the Aurora, Elgin & Chicago (later called the CA&E), an electric interurban, promoted commuter subdivisions along its route, hoping to generate passenger traffic.  High Lake, located just to the east of downtown West Chicago, was one such streetcar suburb promoted by this line. High Lake still exists as a subdivision of West Chicago, however, the lake and the clubhouse are gone. In 1912 the C&NW built a new passenger depot (now the Wayne & Helen Fox Community Center, located at 306 Main Street) and an underpass, as well as the Wilson Street bridge over its mainline.  It moved its 1869 depot across Washington Street, converting it to a freight depot.  The 1869 depot still stands today at 119 W. Washington Street. The multiple railroads also meant that a lot of migrant labor was brought in to the City. Recent immigrants to the United States were a large portion of this labor force. Boxcar camps were set up west of town and by the mid-1920s, Mexican immigrants began to dominate the railroad worker population and over the next few decades slowly moved from the company housing to their own homes in town. In 1923-1925 Mayor Edward J. McCabe embarked on a major street improvement program, building nine miles of concrete streets and installing an ornamental street lighting system.

Starting in 1930 the City renamed several streets and instituted a new numbering system for building addresses. In the 1930s, the town’s growth slowed dramatically and the population actually decreased.  The CA&E interurban trolley abandoned their West Chicago branch in 1937. World War II brought new economic vitality.  The population grew 17% during the 1940s to a 1950 total of 3,973; a whopping 80% during the 1950s to a 1960 figure of 6,839; and another 47% during the 1960s to 10,100 in 1970.  Part of this growth reflected annexations of existing developments, but much of it resulted from new building, including the construction of a number of apartment complexes.  By 1980 the population reached 12,500. Significant changes in the face and structure of West Chicago occurred throughout the post-war period.  The newly formed Rotary Club of West Chicago built an outdoor pool in the city-owned Reed-Keppler Park.  The West Chicago Railroad and Historical Society was formed in the 1960s and was later absorbed by the new West Chicago Historical Society in 1975, it added its own museum facility in 1979 when Miss Celia Kruse willed the Society her 1917 family home. In 1954, the West Chicago Public Library built its first permanent home with tax monies.