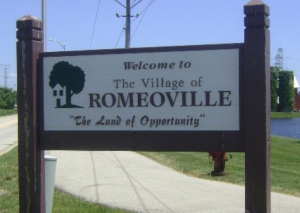 The Village of Romeoville is located on the Des Plaines River (named by the French for the maple trees found along its banks) in the southeastern corner of DuPage Township (named in honor of Du Pazhe, a French hunter and trapper, who at the beginning of the nineteenth century settled at the junction of the east and west branches of the river that now bears his name) and the northwestern corner of Lockport Township (named for the community which was established in 1837 just east of the site of the first look of the Illinois and Michigan Canal) in the northeastern part of Will County (named in honor of Dr. Conrad Will, a pioneer southern Illinois politician,  member of the first Constitutional Convention of 1818, and a member of the Illinois legislature from 1818 until, his death in 1835) and in the northeastern part of the State of Illinois (named in honor of the Illini Indian tribes who lived in the region before the non-Indian settlers arrived). With a history dating back to the middle of the 19th century, Romeo, as it was originally known, grew with its bustling stone quarrying, which furnished the basic materials for early road construction and buildings.

Although Romeoville was once economically dependent in the main on nearby agriculture and dairy farms, the Village prospered from its adjacent stone quarries. The bustling industry supplied the basic materials from early road construction and buildings in such quantities that, even before Joliet, Romeoville acquired the distinction of becoming the “Stone City”. In its heyday, two trainloads of limestone were shipped throughout the Midwest each morning on the Chicago Rock Island and Pacific Railroad. Loads were also carried in great quantities on the Chicago and Alton Railroad. One of the most famous buildings constructed with Romeoville limestone is the Illinois State Capitol Building in Springfield. The coming of concrete as a building material, however, spelled the decline of quarrying and Romeoville’s importance was greatly diminished, for the stone was Romeoville’s most famous export. The first non-native American men to travel through the Romeoville area were probably the French geographer Louis Jolliet and the Jesuit Missionary Father Jacques Marquette who explored the region in 1673. Large numbers of white settlers did not arrive in the area until the late 1820s as access to the Great Lakes Plaines became easier due to the opening of the Erie Canal in New York.

In 1816, Congress decided to construct the Illinois and Michigan Shipping Canal to facilitate greater non-Indian settlement. A strip of land 20 miles wide was then acquired from the Native Americans, the Des Plaines River being in the center of the acquired strip. Plans for the construction of the Illinois and Michigan Canal would connect Lake Michigan and the Illinois River. Romeoville was one of the last of the Illinois areas to be occupied by Native Americans in 1820s. Supplies and laborers had to be brought in from Fort Dearborn (later to become Chicago). A road from Chicago to Lockport was named Archer Avenue, is named after one of the canal commissioners. In 1830 during President Jackson’s administration, the Indian Removal Act became law. Over the next four or five years, Native American villages were moved out and new towns were laid out along the course of the proposed canal. With visions of commercial prosperity from the projected canal and the eventual railroads, real estate developers came to Romeo. Some lots were sold, especially in the area known as “Rairdon’s subdivision,” and a post office was established at what became known as the Alton Railroad station from October 29, 1833 to February 27, 1834, with John Blackstone as postmaster. By state law, the canal’s board of commissioners were empowered to fix the route of the canal and to lay out the land on each side of the canal in tracts and town lots and sell them at public sale. One town planned by the commissioners was “Romeo”. It was named in honor of the Shakespearean hero and planned as a romantic twin city and rival for nearby Juliet. The plat of Romeo was recorded in September 14, 1835, in the Cook County Court House (Will County was formed January 12, 1836). In 1835 the land sold for $1.25 per acre, one year later it sold for $200. In 1837 one town was laid out at the site of the canal locks and was named Lockport. Towns four miles north and south were also laid out, creating Romeo in 1835 and Juliet in 1837. The depression of 1837 greatly hurt the canal land sales and most of Romeo’s inhabitants were the transient canal construction workers. A majority of the workers were immigrants from Ireland. The Illinois and Michigan Canal was completed in 1848 and connected the Great Lakes to the Mississippi River watershed along a longstanding Indian portage route. The 97-mile canal extended from the Chicago River near Lake Michigan to the Illinois River in Peru, IL. It rapidly transformed Chicago from a small settlement to a critical transportation hub between the East and the developing Midwest. The towpath trail along the canal is a State park that runs through a rural and wooded landscape linking a number of towns such as Romeoville.