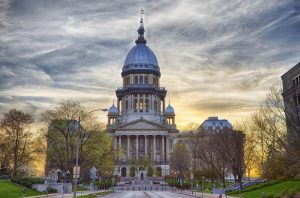 Cahokia, the urban center of the pre-Columbian Mississippian culture, was located near present-day Collinsville, Illinois. Several burial mounds and adobe structures were created in Southern Illinois across the Mississippi River from St. Louis. A gigantic mound, known as Monk’s Mound near Cahokia, is about the same height from its base as the Pyramid of Giza. Built around 1050 AD by an immense marshaling of human labor, this huge earth-work faced the site of a palisaded city that contained more than one hundred small artificial mounds marking burial sites. This Mississippi valley city of Cahokia is estimated to have had a population of about 16000 to 20000, the most concentrated population north of the Rio Grande until the late 1700s. Radiating out from Cahokia for many miles were tilled fields that supplied the corn for the urban dwellers. That civilization vanished circa 1400–1500 for unknown reasons. A severe earthquake that damaged Monk’s Mound at that time might have challenged the supernatural powers claimed by the Cahokian chiefs. Cahokians might have also outstripped their water supply caused in part by large-scale deforestation, and the period of global cooling or mini Ice Age of the era might have caused recurring famines and migration. The next major power in the region was the Illiniwek Confederation, a political alliance among several tribes. The Illiniwek gave Illinois its name. The Ho-Chunk, a Siouan people of the Chiwere subgroup & the alleged oldest continuous Siouan society, were also believed to claim some land north of the Rock River. During the Beaver Wars period of the 17th century, the Iroquois pushed through and briefly conquered Ohio, Indiana & Southern Michigan, forcing several peoples out of those regions. Several migrating groups of Miami & Mascouten– the oldest known inhabitants of Indiana & S. Michigan– spread throughout the western Great Lakes & Upper Mississippi region, living wherever they could. The known tribes were the Miami, Mascouten, Wea, Atchatchakangouen, Pepicokia, Mengakonkia, Pinakashaw & Kilatika. The Beaver Wars also caused a secondary conflict in the greater Wisconsin area known as the Second Fauk War, which pushed the ancestors of the Lakota/ Dakota out onto the plains & destabilized the Dakotas. The French, who arrived during the 1670s- 80s and established the Illinois colony, helped to stabilize the region.  The Miami & Mascouten subtribes merged back into two– the Miami & Wea– & returned to the east in the 1690s. In the aftermath of the Yamasee War (1715-1717) in the early 18th century, the French also offered aid to a breakaway group of Yuchi known as the Chisca, who had once resided in southeast Kentucky and had them migrate into Illiniwek territory. During the French & Indian War, English influence spread deep into and destabilized the Illinois Colony. The largely Algonquian-ized Chisca split away and returned to Kentucky, taking several of the Illiniwek peoples with them (although, some remained) and became known as the Kispoko. The Kispoko soon after merged with the Shawnee. Later, the remaining Illiniwek were pushed out onto the Great Plains, alike many other tribes and were broken down as several peoples fought for adequate land. Today, the remaining Illiniwek are part of a single tribe– the Peoria of Oklahoma.

In the 20th century, Illinois emerged as one of the most important states in the Union. Edward F. Dunne was a Chicago Democrat and leader of the progressive movement, who served as governor 1913–1917. He was succeeded by Frank O. Lowden, who led the war effort and was Republican presidential hopeful in 1920. Democrat Adlai Stevenson served as governor in 1948–1952. William G. Stratton led a Republican statehouse in the 1950s. In 1960 Otto Kerner, Jr. led the Democrats back to power. He promoted economic development, education, mental health services, and equal access to jobs and housing. In a federal trial in 1973, Kerner was convicted on 17 counts of bribery while he was governor, plus other charges; he went to prison. Richard B. Ogilvie, a Republican, won in 1968. Bolstered by large Republican majorities in the statehouse, Ogilvie embarked upon a major modernization of state government. He successfully advocated for a state constitutional convention, increased social spending, and secured Illinois’ first state income tax. The latter was particularly unpopular with the electorate, and the modest Ogilvie lost a close election to the flashy Democrat Dan Walker in 1972. The state constitutional convention of 1970 wrote a new document that was approved by the voters. It modernized government and ended the old system of three-person districts which froze the political system in place. Walker did not repeal the income tax that Ogilvie had enacted and wedged between machine Democrats and Republicans had little success with the Illinois legislature during his tenure. In 1987 he was convicted of business crimes not related to his governorship. In the 1976 gubernatorial election, Jim Thompson, a Republican prosecutor from Chicago won 65 percent of the vote over Michael Howlett. Thompson was reelected in 1978 with 60 percent of the vote, defeating State Superintendent Michael Bakalis. Thompson was very narrowly reelected in 1982 against former U.S. Senator Adlai E. Stevenson III, and then won decisively against him in a rematch in 1986.